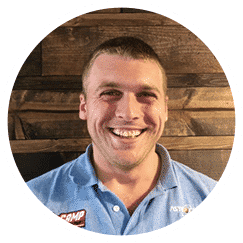 “I am proud of all the summers I have spent working for camp. I was able to be a part of the positive experience summer camp can have on young people, helping guide them as they grew from quiet and shy young children into confident, intelligent and passionate young adults. Seeing the influence that summer camp can have on campers and staff alike, helps drive my passion for this industry”.

John’s career with Guided Discoveries started as a camper in 2004, at Catalina Sea Camp. He then joined as staff in 2008 as a Cabin Counselor. After 4 summers he was promoted to a Crew Chief and again in 2015 to Head Counselor. Now in his role as Summer Camp Director he is excited to bring his passion for summer camp to Virginia.

Though John grew-up in landlocked Nottingham, England, he is an avid scuba diver. He has always had an interest in space getting his first telescope at age 12. John enjoys following current space exploration missions and future colonization projects.
John got his Bachelors Degree in Management from Southampton Solent University. In his free time, he enjoys being outdoors; hiking, traveling, and taking part in Obstacle Course Races.